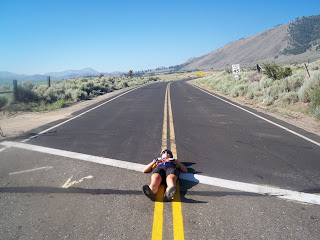 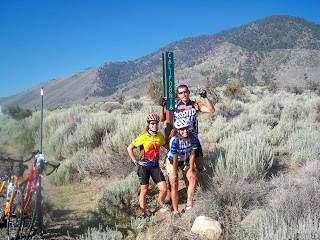 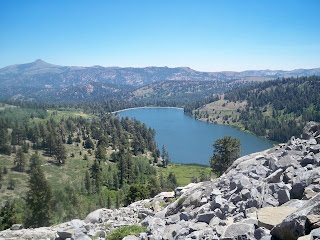 I know I said we did our last 100 mile ride of the trip, but yesterday we rode 116 miles to reach Placerville, California. We crossed into California about 20 miles west of Carson City. We rode along a small back road and when we reached the state line we were all a bit surprised at the California sign. It was so small! We all joked about it and got our pictures taken. Check out the picture of me lying with one half in Nevada and one half in California.

Yesterday's ride was hard! We had our final day of climbing - we had to go over Kit Carson's pass, about 8,500 feet. As usual, we were all looking forward to the climb, but especially the descent. However, the elevations on the cycling map was a bit deceiving. It looked like once we cleared the summit, it was all downhill....wrong! Just as we started to go downhill, the road turned skyward again. The first time I thought, "okay, no problem", the second time I thought, "hmmm, okay last climb then downhill!", the third, fourth, and fifth time I thought, "Not again, stop toying with me!" I also thought about tossing my bike over the side of the mountain! Sam and I both agreed that we had not done that much climbing in a single day the entire trip. It was the toughest 116 I've done so far!

Ha, but we made it! We are about to head out to Sacramento this morning. I offered to buy the team breakfast, so I'm heading over to Chuck's Restaurant right now. Sam, Bob, and Andrea are preparing the bikes as I write this. Andrea is learning a lot about cycling. So far, I love California. I wish I had more time to fill you all in our how pretty the ride was yesterday (despite the agonizing hills).

Congratulations you guys!!!!! tom Laura and I have held you in our hearts, thoughts and prayers. as of now i believe you have made it or are so close.... 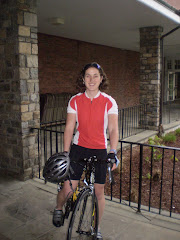